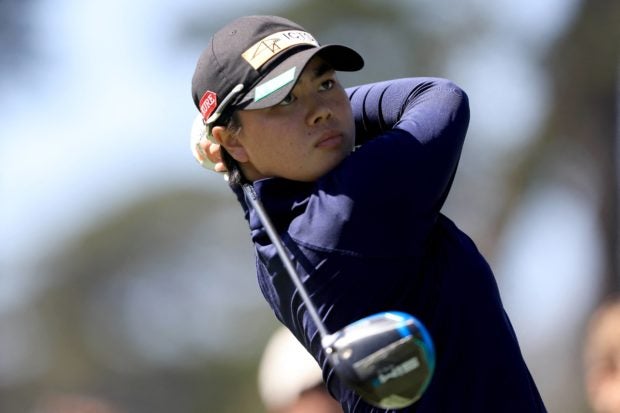 Yuka Saso is dialed in on the Olympics. —AFP

In Senate Resolution No. 755, Angara noted that Saso’s “exceptional talent in the field of golf has brought pride, joy, and hope to our country, the Philippines, amid the pandemic.” The resolution was filed last June 10, but its copy was only sent to the media on Wednesday.

In a statement on Wednesday, Angara noted that Saso’s feat has captured the hearts and minds of Filipinos and has generated increased awareness and interest in the sports of golf in the country.

He also cited the hard work and determination of Saso to continuously improve her game and be among the best female golfers in the world.

“Again another Filipina athlete has made her mark in the international sporting arena,” Angara said, citing Hidyln Diaz who won a silver medal in the Rio Olympics and is vying for another medal in the Tokyo Games, and tennis rising star Alex Eala who is making her name in the under-18 tournaments and has appeared in the Roland Garros semifinals last year.

“Now with Saso winning the U.S. Women’s Open, the whole world is now noticing the quality of athletes the Philippines is producing and I believe even more will emerge sooner than later,” the senator added.

To recall, Saso, a 19-year old Filipina-Japanese, also represented the country back in the 2018 Asian Games in women’s individual competition where she bagged two gold medals.

She also won in the 2020 Japan Ladies Professional Golf Association (LPGA) tournament, leading her to be tagged as the 2020 Athlete of the Year by the Philippine Sportswriters Association.

Angara said Saso is “now at par” with 2008 South Korean champion Inbee Park, as the youngest to win in the U.S. Women’s Open.

“Yuka is an inspiration to all Filipino golfers and will surely encourage more young girls and boys to take up the sport here in the country,” he also said.

Along with Razon, he also thanked MVP Sports Foundation chairman Manny Pangilinan and president Al Panlilio for their continued support to the development of Philippine sports, including golf through the National Golf Association of the Philippines.

“These are truly exciting times for Philippine sports. I salute Yuka for bringing so much honor and pride to the Philippines. Thanks to the feats of Saso and our other Filipina athletes, our people have something to cheer for amidst the pandemic,” Angara said.